skip to main | skip to sidebar

The Sea is Our Mother 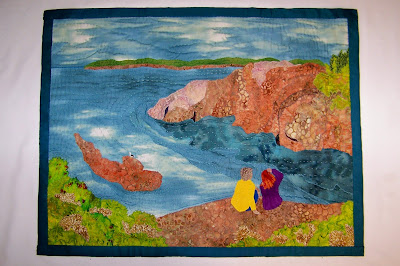 This second piece that was submitted for jurying by photo is one that I worked on for over a year.    In a previous post, I showed one of my photos taken in Cape Breton that was published in the Toronto Globe and Mail.     This piece was inspired by that particular spot.   As part of Hike the Highlands we walked the Jack Pine Trail, stopping for a rest at squeaker hole.    I was taking photos of the scenery and snapped one of two women sitting on the cliff together.

Looking at the photo upon my return home, it just called out to me to be a quilt.   The actual figures are anonymous as we only see them from a back view but I used the poses from the photo as a rough guide.  I also took some liberties with the original scene to make it more pleasing and show depth (like adding a piece of land in the distance and a tiny gull on the rocks).   I call it 'The Sea is Our Mother' because of the respect that people who live near the sea and gain their livliehood from it, display.   There is an understanding among maritimers of how generous, beautiful and powerful the sea can be.   The piece is  24" x 18.5" and is hand-stitched and quilted.   I pieced the rocks together with many, many stitches.....This piece invokes in me a picture of contemplation and a common understanding shared without words.    It reflects my own love of the sea and rugged landscapes.
Posted by Juanita at Thursday, June 30, 2011 No comments:

Labels: The Sea is Our Mother

New Fibre Art - "On the Rocks: Some days you just need to get away" 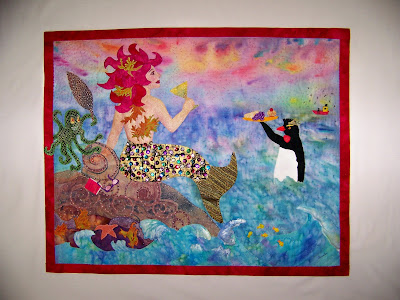 Last month I sent submissions to Lowell Gallery in Massachusetts to be juried for an exhibition.   The theme was "The Sea".   I was keeping them under wraps but they were not accepted so I will post them.   This is the first piece - a whimsical look at getting away from it all.   Connie Kaldor wrote a song several years ago called 'Wanderlust' about how, every once in a while, a woman's gotta pack her bags and get away.   So I created the ultimate getaway.   I hand-painted the background and appliqued onto it.   Everything is appliqued and quilted by hand.   For depth I appliqued on some waves at the bottom and stuffed them.   The mermaid was painted on a piece of white cotton then I fused a piece of filmy gold organza onto her to make her skin glow.   I then fused and stitched her to the background.   I added a tail, sequins and more gold organza and here she is being pampered by a rockhopper penguin and octopus.  On the rocks I placed her sunglasses and book.  The fisherman in his boat on the horizon could have several meanings.......you decide.

Click on the picture for a close up view.
Posted by Juanita at Saturday, June 25, 2011 2 comments: 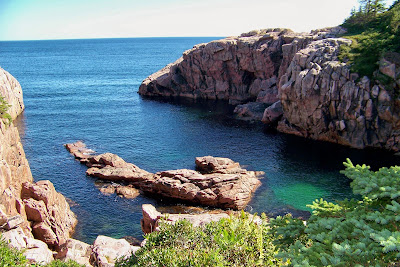 A few weeks ago, I sent some photos to the Globe and Mail.  They were asking for photos taken in Canada's National Parks.   To my surprise they chose a photo that I took in Cape Breton National Park and it was published on Thursday, June 9 in their Travel section.   This photo was one of the inspirations for a piece called 'The Sea is Our Mother' which I submitted to an exhibition recently.   It was taken during my annual trip to the Hike the Highlands Festival in Cape Breton.    We were hiking the Jack Pine Trail and stopped at this spot called a 'Squeaker Hole'.    A lovely spot with a view of the Atlantic from up on the cliffs.
Posted by Juanita at Tuesday, June 21, 2011 No comments: 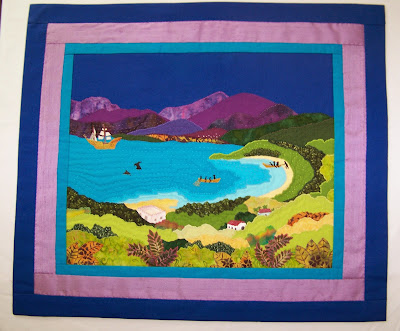 Ta Da!!  All year I have been working on a piece commissioned by a friend.   She owns a condo in Mexico and wanted me to create a piece showing the view from her balcony there.    She will hang it in her home to remind her of her piece of paradise.   We decided we would create a piece using brilliant folk art colours and set the scene about 200 years ago, the way things would have looked back then.   I took out the high rises in the distance and added fishermen, a sailing ship and even some whales.   I chose colours for the frame to match a Mexican bowl and table runner that she has in her home (blue/turquoise/lavender).  She hadn't seen it as I worked on it but I sent photos from time to time.   Since I will be bringing it to her this afternoon I took a new photo to share on my blog.   The quilt is called "Lynne's Little Piece of Paradise".    I also made up a couple of art cards with the image so she can share it with friends if she wishes.   From time to time, my musical friends and I get together to play music and eat so Lynne has planned a musical BBQ evening at her house tonight where we can sing/eat/drink/and hang her new art quilt.  I hope she likes it.
Posted by Juanita at Sunday, June 19, 2011 1 comment:

I lost my flags

As you can see my flag counter is showing only a few visitors.   That's because I was working on a new addition to gadgets and somehow lost my flag counter.    When I tried to get it back it would not recognize my pertinent info (probably because it was inaccurate) so I had to re-register.  I have sent an email for help but I am afraid that my stats are gone forever.   I just loved seeing the number of countries who had visited my blog.  Now I am starting from scratch.......
Posted by Juanita at Friday, June 10, 2011 No comments: 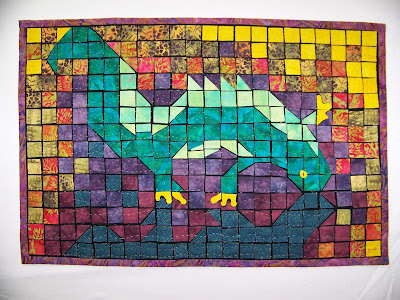 I finally finished my mosaic lizard (iguana?).    It still doesn't have a name - any ideas?  This was a challenge piece with two friends to use a mosaic design.   I haven't seem their contributions yet but I will post them too.   I started by drawing a lizard in my sketch book, colouring it with pencil crayons, and dividing it into squares.  Each square was to represent 1 inch.   Then I prepared some fused fabrics and started laying them on a piece of black cotton.  Once I had the shades I wanted, I ironed them down, added batting and backing and started quilting using 4 colours of thread throughout.   Some of the pieces didn't fuse perfectly so I glued down the edges with a tacky glue which worked well with the cotton fabrics and didn't show through.   I cut the backing a little bigger than the piece and used it for my binding.    It was very freeing to take a bunch of one inch squares and just place them wherever.  Click on photo for a close up view.
Posted by Juanita at Friday, June 03, 2011 No comments:

You can see my work at #juanitasauvefibreart on Instagram. For the last 22 years I have been creating original fibre art, both hand and machine stitched. I create many hand embroidered pieces often with painted or felted backgrounds. I find inspiration in the natural world, in personal and political themes and from my imagination, and there is usually a story behind my pieces. Small art, fibre art jewelry, journals, postcards, hoop art and ornaments are a big part of my fibre art journey. I stitch full time and love learning about fibre and exhibiting, presenting to Guilds and selling my work. I learn from other artists, workshops, books, and fibre arts groups. When I am not stitching I am spending time outdoors, writing songs and singing with our band, Local Colour. All photos and artwork on this site are the sole property of the site owner/ copyrighted by the author and not to be copied or reproduced without my permission. Enjoy your visit! 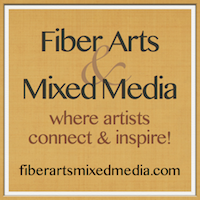